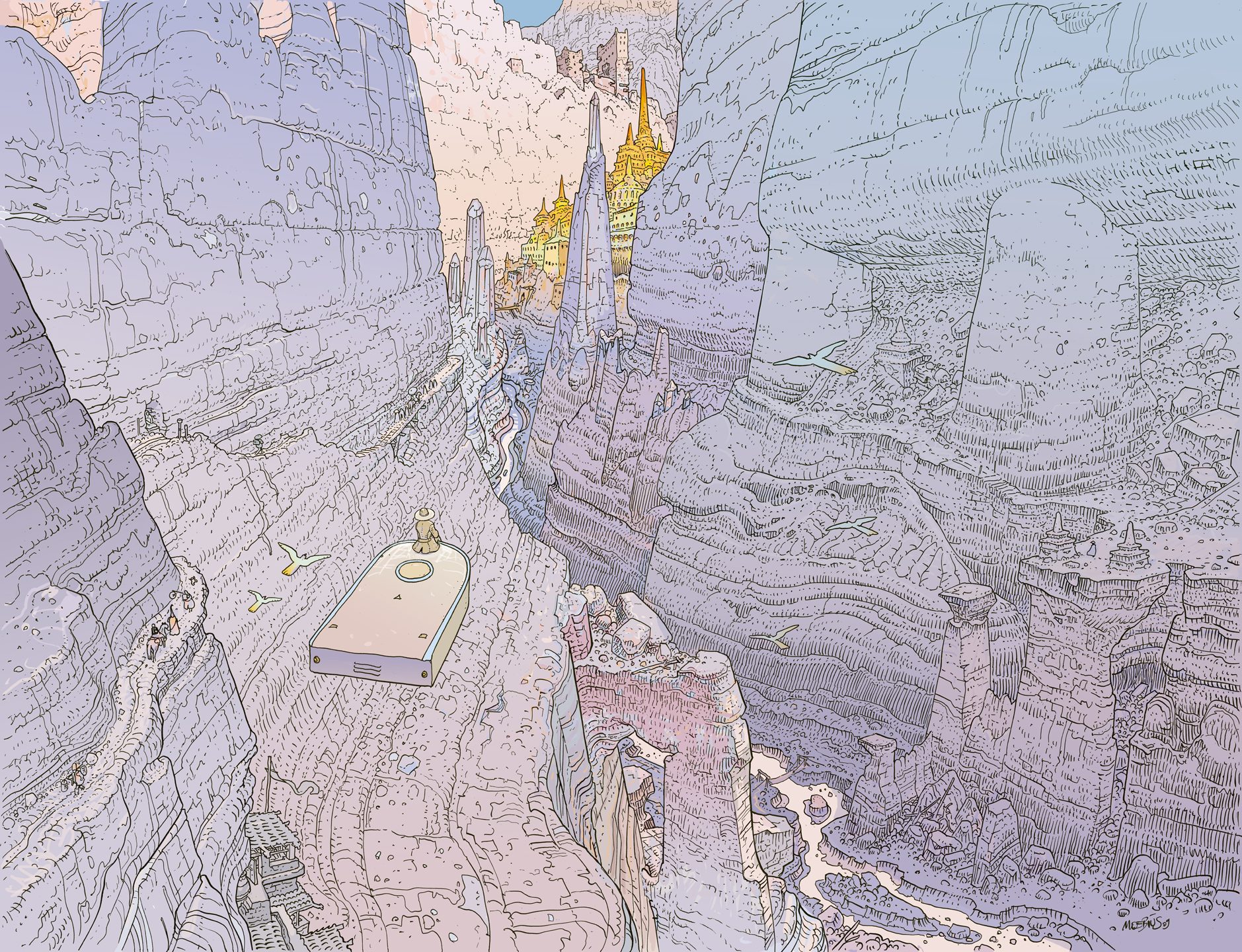 Above: The opening plate in the Voyage d’Hermès folio. Moebius, 2010.

If you have followed the Sci-Fi-O-Rama blog and Facebook page, you have likely noticed our abiding love for the great Moebius (Jean Giraud, 1938-2012). With a career that spanned six decades, Moebius was remarkably prolific. His fertile imagination encompassed everything from gritty Westerns to mind-bending psychedelia and he produced influential works in comics, film, illustration, and fine art. A look at any phase of his life will reveal something original, amazing in its creativity, admirable in its craft.

However, in 2010 and at the age of 72, the master of French sci-fi comics released a nine plate folio that might be viewed as a culmination of his entire career, Voyage d’Hermès, subtitled “Les Mondes Élémentaires: Un Voyage Imaginé et Dessiné par Moebius” or “The Elemental Worlds: An Imagined and Drawn Journey by Moebius“.

Commissioned by French fashion house Hermès, the project is a bit of enigma. While its name would align it with one of their signature perfumes, the work has no discernible relationship with the fragrance or the brand. The images were ostensibly produced for some sort of marketing campaign, but never used for that purpose. A limited edition folio was released, bound with a Hermès-branded ribbon, and the Moebius/Hermès collaboration quietly came to a close.

What Hermès (and the world) got out of their investment was Moebius at his purest; clean, precise lines and a vibrant, electric palette straight from the first moments of an acid trip.

The nine plates tell the loose story of a wondrous journey in which a glowing, rainbow-coloured bird leads an explorer across vast, uncanny landscapes. Many of Moebius’ lifelong visual preoccupations are here: austere deserts with limitless horizons, the melding of architecture and landform, flying machines and flying beasts, crystals and spheres. These nine images construct a world as beautiful and coherent as any Moebius ever created.

These images have achieved a sort of internet fame in the years since his passing, and are often used as prime examples of the masterful art style he used throughout his career. One thing that is rarely noted however is that these images were not typical of his work, but were instead a bold, late-career experiment. Moebius crafted the entire set digitally on a Wacom Cintiq, a technology he adopted only a couple of years prior, after a lifetime of pen and paper. Elderly and ailing, Moebius was still experimenting with his craft, and with Voyage d’Hermès reaching new heights.

For a broader view of Moebius’ career, check out our farewell to the master written in 2012.