The Art of Ian Miller + Interview 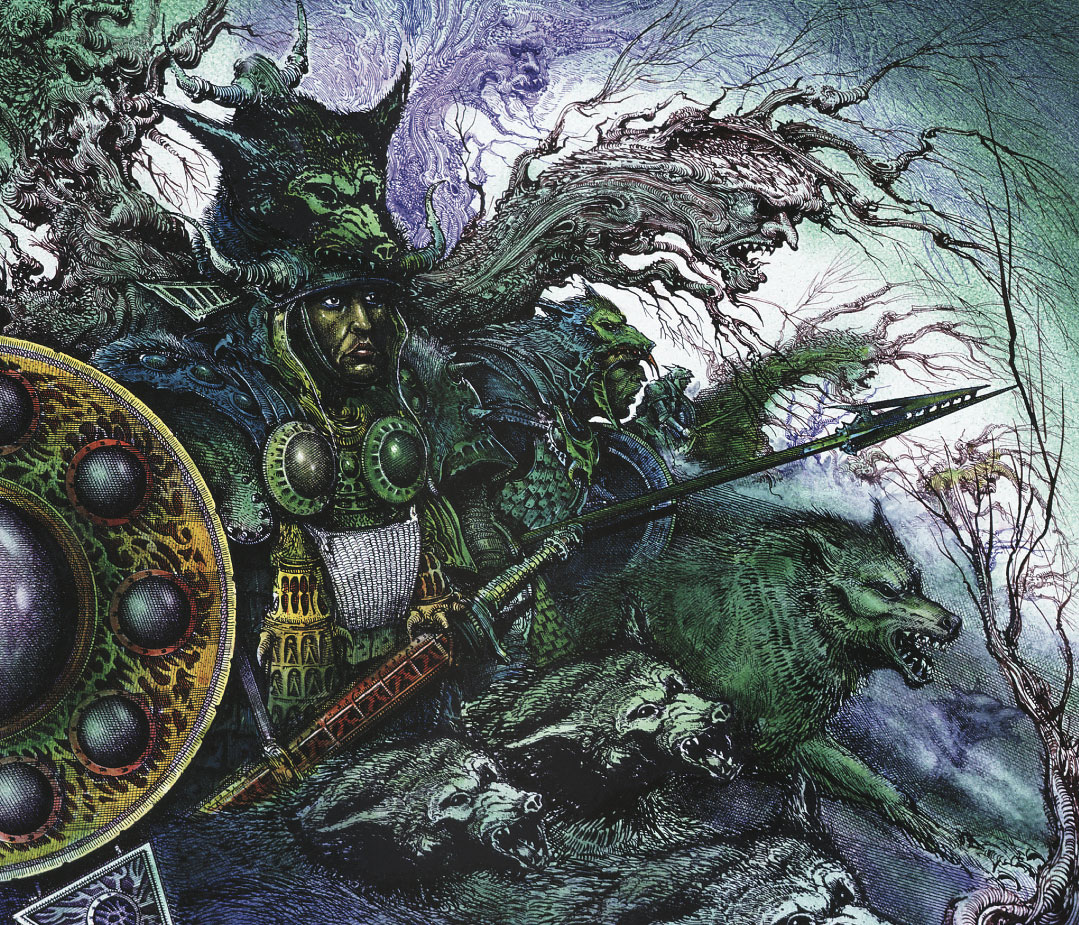 Titan Publishing asked me to interview British illustrator Ian Miller to coincide with the launch of ‘The Art of Ian Miller‘, a 160 page compendium spanning four decades. How could I refuse?

Compiled by Ian Miller and Tom Whyte, it’s bursting with over 300 pieces of Miller’s breath-taking work and detailed descriptions of his creative process, inspiration and general artistic philosophy. Suffice to say it’s a “must read” for any serious fantasy or sci-fi illustration aficionado.

Imagine if you will that all of science fiction and fantasy can be mapped to points and places on Earth. Take for example Ridley Scott’s vision of cyberpunk which blends the shimmering streets of Tokyo and rain lashed gloom of Gotham against a hell-like backdrop of refineries & furnaces. A thinly veiled homage to Scott’s childhood home in England’s once mighty industrial Northeast.

How then about the post-apocalypse? Visions of the ochre desolation found in the Australian outback or the tumble-down tangle of a ruined Las Angeles after a nuclear holocaust spring to mind. Both driven into our collective awareness by the likes of George Miller and James Cameron.

Even Tolkien’s Middle Earth has it’s probable roots in the rolling hills of Lancashire (or perhaps Cheshire?) and the foreboding grey of the Welsh Mountains. All re-imagined by Peter Jackson and inadvertently transmogrified into New Zealand’s greatest-ever tourist advertisement.

Now then, fire your mind skywards and glide far out to sea to a place that only appears on the most ancient and wildest of maps…

Descend now through the vortices. Time and scale begin to quiver then bend. The cloud breaks in a shock wave, colours and form ripple and blur. Welcome to the ultimate gothic netherworld; a place both infinitely ancient and ultra-modern in a way that far outstrips steampunk. Vast towers aeons old form the backdrop as Teutonic Knights of Chaos battle giant wooden Proto-Mechs. Above, baroque dragons soar and pulse fire across a nightmare-scape beyond the edge of the imagination…

Welcome to the sublime realm of Ian Miller.

Q: You’ve obviously had books published in the past. Was this something you’d been planning for a while?

No, although people kept asking me if a new book would ever appear. Some said it was long overdue. I think being around for so long helped. People also keep asking me if I’m going to have an exhibition any time soon. I always reply “They are expensive things to do, and nobody has invited me to show”. Maybe somebody will do a retrospective when I’m dead?

Q: Tolkien, Herbert, Lovecraft, Bradbury to name but a few – do you have a favourite world to work within or is it simply a case of fashioning your own visions to fit?

Mervyn Peake is a great favourite.The Gormenghast Trilogy is a triumph. I’m always amazed when people say they have not read it. If anybody reading this has not, go out and buy it now.

Q: You Maelstrom project was exhibited as part of a show in The Shetlands, are you well travelled and are there any particular places that inspire you?

Not really, but I’ve been to the edge of the Dark Forest and London. The roads are not good where I live, and strange things happen to travellers when the light fails.

Q: Your depiction dragons have always fascinated me, is there a hierarchy in how you depict them? And how do you define a Drake, Dragon or Worm?

I loved the Dragons in Rupert Bear when I was a child, and nobody could ever say, as one might with a horse, “That doesn’t look right, it’s wrong”. As a point of interest my horses always looked like Alsatian dogs (German shepherds). As to whether one calls them Drakes, Worms or Dragons is of no great concern to me. A Pedant might argue it matters a great deal and good on him.

Q: With regards to the inspiration, you mention past master’s such as Durer or Rackham. Are there any contemporary illustrators, artists or directors that you particularly admire?

Martin Kippenberger, Mira Schedule, Ensor, Alfred Kubin, Joseph Beuys, Matisse, for a few. In truth, I do a disservice to all those I fail to mention. Every day I discover new artists, known and unknown, and reconnect with artists I encountered as a student. They all matter. If I listed them all I need a very long roll of paper. By days end I will most probably discover more.

Q: I’m often fascinated by the haunted emotion you’re able to capture in many of your more humanoid characters. Do you ever use reference or is it all drawn straight from the imagination?

I have never used a great deal of reference if indeed any. I now wonder if I made things difficult for myself. When I discovered some artist set up photo shoots with models I was really surprised. ‘Ignorance is bliss’ I suppose. Somebody once called me medieval. I’m not really sure, even now, whether that was a compliment or an insult? Strange to say, whatever face I’m trying to draw, I always open a small Thames and Hudson book of Durer images I bought back in 1967, at a page depicting Durer as a young man (self-portrait) I think this acts as a sort of comfort blanket? As to haunted emotions, I can’t say that is something I consciously strive for. It just comes through that way.

Q: You speak of childhood dreams, nightmares and visions and note that you’re still drawing your childhood toy box. I wonder, do you have recurring dreams today?

Yes, and I do a lot of dreaming whilst I’m awake. I could say rabbits are recurring, but that might start us off on a silly track with no way back.

“Once the world of ideas has been transformed, reality cannot hold out for long”

Q: With such a rich and varied visual language every reader’s opinion on your art must surely be different. Could you pick out three personal favourites from the book?

In truth, I have a far wider remit, image-wise, than represented in this anthology, but as you suggest, peoples reactions to my work are varied and different. That my work invites comment, for good or bad, is to be celebrated. If I were to pick two pieces I like at this moment, they would be the sections on the very last two page entitled Actium and the image sections on pages 116-117 Rift X.

Q: You have a real flair for mind-bending, intricate and wildly flamboyant costume and character design. Once again, are there favourites (Ents, Orcs. Elves)?

I like them all equally. Surface detail has always been important. Being short-sighted might have something to do with this. I have always liked studying things up close, patterns, cell structures. Somebody once said I had a ‘forgers eye’ Be that as it may, I love pattern. you can also paper over the cracks with it.– the holes in the wainscot, were things that scratch live.

Q: Finally, with a career spanning four decades is there any stone left unturned for you?

There is a mountain still to climb. A raft of better more engaging drawings to do, –making a film – doing a lot more writing. I have just released a dysfunctional tome called the Broken Diary, all words, which wavers between the real and unreal in a very frustrating fashion.

“I must try harder”

Write this down a thousand times.

The ‘Art of Ian Miller‘ is out this week (week 3, April 2014) and Titan Publishing is offering both Standard and  Special Limited editions. The latter differentiated from the former by a signed print and more.

Dig into even more Miller’s portfolio and blog over at ian-miller.org

All images courtesy of Ian Miller / Titan Publishing. Special thanks to Tom Green for suggesting this post.

3 thoughts on “The Art of Ian Miller + Interview”